A Punxsutawney Phil degree in history of science

This post is about how aspects of the movie Groundhog Day (with Bill Murray and Andie MacDowell) can be seen as a parable for a specific controversy in the history of science. But first I need to say a thing or two on that controversy.

The contingency-inevitability controversy is about the question whether the history of science would inevitably have had to lead to our current science, no matter what contingent path had been chosen in the past, or whether it could have lead to true alternatives, that is, sciences that are as successful as our current one but remarkable different in its theories, methods, machinery etc. [Some classical references: Hacking, Ian. 1999. The social construction of what? Cambridge, MA: Harvard University Press. Hacking, Ian. 2000. How inevitable are the results of successful science? Philosophy of Science, 67, S58–S71. A more recent collection of works on that issue: Léna Soler, Emiliano Trizio & Andrew Pickering (Eds.). Science as it could have been. Pittsbugh, PA: University of Pittsburgh Press.]

The most often quoted statement in this controversy is from Hacking (2000, S61, original emphasis):

[I even quoted it myself in a paper once and refrained from pointing out the redundancy in "implicitly contain or imply" lest I'd be seen as a smart-ass or too stupid to sense an irony by Hacking. But a blog-post seems fair enough to indulge.]

The extreme positions on the contingency-inevitability continuum are:
1. Extreme Contingentism: History of science is totally contingent. If scientists had taken an alternative turn at some point in the past, we would live with an entirely different science. It might not even be compatible with our current science yet be as successful (e.g., in statistics of healing sick patients).
2. Extreme Inevitabilism: History of science is totally inevitable. No matter what alternative turn scientists might have taken in the past, we would live with exactly the same science as we have today. 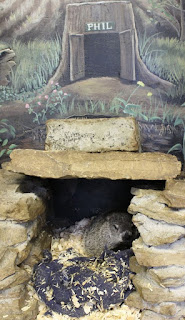 Suppose the film-makers of Groundhog Day had been adherents of extreme contingentism. Then, Phil Connors (Bill Murray) could have planned nothing, because Butterfly Effects would have thwarted all his attempts to anticipate what will happen the next (same) day from what he experienced the previous (same) day. The boy would not always fall from the same tree, the man in the restaurant not always choke on a chunk of steak etc. Phil Connors should become mad by round 10 and the film-makers unable to tell a narrative. The film would be DaDa.

Suppose, instead, the film-makers had been adherents of extreme inevitabilism. Then, Phil Connors could have changed nothing, no matter how hard he tried. All his attempts would be futile and the film would have no ending, just an open end telling us that it will go on and on forever.

Apparently, the film-makers chose an intermediate route, in order to be able to tell an interesting narrative. While Phil Connors is able to remember what had happened the previous (same) day and react differently, all others do not and behave just the same. In this way, Connors is a contingent factor (loose cannon at times) in an otherwise predictable world. Therefore, Phil Connors can work at trying to change his fate. If the rest of his microcosm was unpredictable or he had no power to change his own behavior and thereby tilt the microcosm towards another direction, then a film without a story would have resulted.

Interestingly, many historians of science think that authors who try to devise what-if scenarios of what might have come to pass, alternatively, (so-called counterfactual histories) are bound by similar narrative constraints. They can allow one or a very few factors of the past to deviate contingently, but the rest must remain predictable. Otherwise, their counterfactual history would become Dadaistic (everything contingent) or boring (everything determined) but either way have no merit for historiography.

P.S.: Of course there are other messages in the movie, like the one that love is a liberating force, but I was exclusively trying to explore analogies with a particular history-of-science issue.
Posted by Joachim Dagg at 13:52