Patrick Matthew is generally considered to be one of the predecessors of Charles Darwin concerning the integration of natural selection into an evolutionary scheme. Concerning the species problem, Matthew (1831. On Naval Timber and Arboriculture, p. 381) wrote:

"Throughout this volume, we have felt considerable inconvenience, from the adopted dogmatical classification of plants, and have all along been floundering between species and variety, which certainly under culture soften into each other. A particular conformity, each after its own kind, when in a state of nature, termed species, no doubt exists to a considerable degree. This conformity has existed during the last forty centuries. Geologists discover a like particular conformity—fossil species—through the deep deposition of each great epoch, but they also discover an almost complete difference to exist between the species or stamp of life, of one epoch from that of every other." (highlight added)

Here, Matthew was dealing with the problem of the stability of species, that is, why do species not disintegrate into one mêlé of amorphous variation without any clear species boundaries (gaps between species)? This problem had two sub-problems: 1. Why does spontaneous variation (sports) not lead to such a mess? 2. Why does hybridization not lead to such a mess? Matthew's answer was natural selection. Oddly, from our current perspective, he later referred to it as the problem of species fixity:

"In my discovery of the fixity of species by natural competitive selection, I have overturned the only argument worth overturning brought forward by ancient superstition against the law of development. I have shown that we [farmers] can go ahead of college-bred, closet-taught naturalists, and leave them to follow in our wake at the distance of thirty years. This is nothing remarkable, as most of them are mere bundles of old-world prejudices. May I therefore hope for assistance from my brother-farmers, that we may keep ahead?" (Matthew 1861. Utility of change of place in seed, and still more in life continued by tubers or cuttings. The Farmer’s Magazine, Ser. 3, Vol. 19: 283-285, p. 285, highlight added)

Species fixity, here, did not mean that species were absolutely fixed in their morphology and physiology. The problem was to explain why species and varieties remained stable, despite the occurrence of sports and hybrids, but why demarcating species and varieties properly was so difficult at the same time. It starts out as a practical problem of classifying organisms, it then takes on a taxonomic dimension (how to define species and varieties), and it turns, in modern parlance, into a problem of the evolutionary maintenance of species (and varieties). In agreement with this, Matthew called himself the "solver of the problem of species" on the title page of the political pamphlet Schleswig Holstein (Matthew 1864) and not "discoverer of the principle of natural selection" as Charles Darwin (1865, 22 and 28 October. To J. D. Hooker. Darwin Correspondence Project, Letter no. 4921.) wrongly wrote to Joseph Hooker.

Despite this stability of boundaries between species and varieties, Matthew thought they could still adaptation (lineage adaptation or anagenesis) to changing conditions, for example, in climate. The splitting of species (lineage splitting or cladogenesis), however, only occurred in short periods after global catastrophes had exterminated most species and thereby rendered an open field for the radiation of the surviving organisms into empty niches so to speak. Hence, Matthew's scheme is one of long periods of stability of species punctuated by short periods of quick radiation and lineage splitting. Naturally, the question arises how long Matthew thought that these periods of stability and radiation were. The only hint he ever gave us, however, are the forty centuries of conformity highlighted in the first quote from Matthew (1831, p. 381) given above.

These 40 centuries only make sense in the context of chronologies being popular at that time, which told the history of the world along the lines of biblical events. Trying to align scientific findings from geology with the stories of the old testament was its own genre and was not regarded as unscientific (even Kepler and Newton engaged in it). The chronology of James Ussher, Archbishop Armagh and Primate of all Ireland, from 1650 was particularly popular. He dated the first day of creation to 23 October 4004 BC and the Noachian flood to 2349 BC.

The Noachian flood was thought to have occurred 4179 years before Matthew wrote his book in 1830, that is, roughly 42 centuries. Having no other numbers to go by than Matthew's 40 centuries of conformity, it would mean that the time for the evolutionary radiation after the last global catastrophe, the Noachian flood, were a mere 200 years after which lineage splitting (cladogenesis) stopped and the environments were fully stocked again. They could still change in response to changes in climate etc. (lineage adaptation) but no longer split. Species boundaries were then stable for 4000 years. This evolutionary scheme can be depicted in a pie chart with 200 years of radiation and 4000 years of stability. 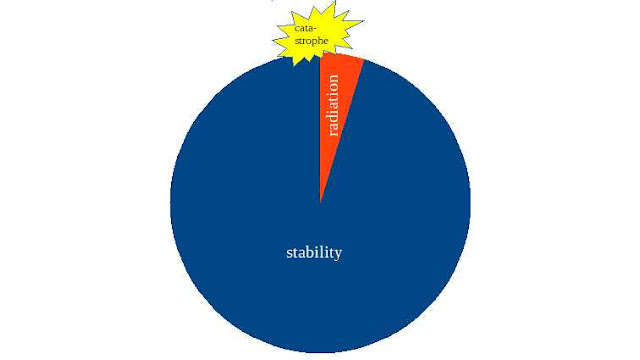 The only other number from Matthew to go by is his statement: "millions of ages of regularity which appear to have followed between the epochs" (Matthew 1831, p. 383). Apparently, Matthew thought that the above depicted clock had turned millions of times. Make that 1 million and the age of Life on Earth would have been 4.2 billion years, which would be quite close to the current estimate of 3.9 billion years. 2 million revolutions or more would, of course, render Matthew's scheme out of whack with modern estimates.
Posted by Joachim Dagg at 19:44